The inflatable drones are the latest revolution in the world of drones, but also have a glorious past. They are the ones who increasingly are replacing more complex multirotors when requested to fly over urban areas or crowded areas. 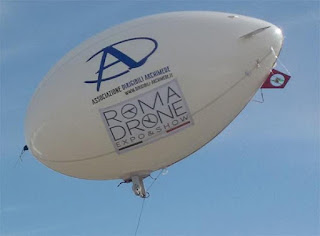 These drones are small inflatable balloons or radio-controlled blimps that are used for TV filming, aerial surveys, traffic control, such as radio repeaters and even advertising. In fact they guarantee lower costs and considerable security, albeit have limitations in speed and maneuver. The point about using these inflatable drones will be done in Italy for the first time, at the Rome Drone Conference, which will take place next Wednesday 17 February at the Auditorium of the Link Campus University of Rome (Via Bolzano 38, from 2pm). The Rome Conference Drone program provides for a focus on inflatable drones.

Participants will include universities, laboratories and companies who are studying or have already started using these particular flying machines, from simple radio-controlled blimp tethered to up to metaplano. There will be a presentations of the Italian Aerospace Research Centre (CIRA), Parthenope University of Naples, the Association Blimps Archimedes and, on the face of the companies, Nimbus, the Next Fly Consortium of Italdron, Images to flight, Droinwork, and TecnoFly2008 Salento Drones.