Director Barry Jenkin's "Moonlight" will open the upcoming 11th edition of Rome Film Festival.
The much-buzzed about film, which will have its European premiere in Rome, is already at the center of a great deal of awards chatter, according to The Hollywood Reporter.
The new film from the "Medicine for Melancholy" director explores the life of a young black man growing up in a rough neighborhood of Miami as he struggles to find his place in the world through topics of friends, family and love.
The film stars Alex Hibbert, Mahershala Ali, Naomie Harris, Jharrell Jermome, Ashton Sanders, Andre Holland and Janelle Monae.
"Moonlight is an extraordinary film, at the same time powerful and tender, realistic and poetic. It is a great honour to open the Rome Film Fest with such a work of art," said Rome's artistic director Antonio Monda.
"This is a film destined to go a long and successful way and which will stay in our hearts; it also confirms the great, genuine talent of Barry Jenkins."
The film played Telluride and Toronto and will play in New York before being released in the US on October 21.

During the Rome Festival 2016 there will presented many films. Among the films shown will be "In war and in love" by Pif or the former Hyena and "Storks in mission" which is distributed by Warner Bros.

Surely the most anticipated films of the season, which will premiere Monday, October 3rd at 21 in the Cinema Barberini in ​​Rome, is American Pastoral by Ewan McGregor. This movie is based on the novel American Pastoral by Philip Roth who is considered one of the masterpieces of contemporary American literature.

Among the famous actors who will take part at the Festival are Viggo Mortensen, the unforgettable Aragorn in The Lord of the Rings but also Tom Hanks that will always be remembered for his performance in Forrester Gump. And still there will be Oliver Stone, David Mamet and Meryl Streep.

The engines are warming up for the 2016 edition of the Maker Faire, the only worldwide event during which creativity, self-employment and digital manufacturing meet, celebrating the culture of technological innovation and presenting the visitors a foretaste of the future that awaits them. From 14 to 16 October 2016, the Rome Fair will turn into a real innovation theme park where will be exposed hundreds of projects, ideas and inventions makers, startups, innovative SMEs, schools, universities and Fab Labs around the world. And for the little ones, the festival of innovations has also prepared this year an extensive Kids area rich in recreational and educational activities.

The Maker Faire Rome - The European Edition is promoted by the Chamber of Commerce of Rome, organized by its Special Agency Innova House and curated by Massimo Banzi, co-founder of the Arduino project, and Riccardo Luna, senior journalist of innovation and Digital Champion Italy.

The underground lake in Monteverde

A special feature for the history of Monteverde is the presence of a proper underground quarry in the basement of the University Hospital of San Camillo.

Speleologists of underground Rome, in 2013 did a survey and in May 2014 they published photos and news on the rediscovery of this extraordinary underground lake.

It dates back to the institute building sanatorium, when, during the construction of the foundations, was discovered an underground cave, on which the foundation of the structure were placed.

The cave, large 7000 square meters and 10 meters high, consists of a greenish yellow stone walls that characterize the subsurface of the neighborhood, and maintains a constant temperature throughout the year, equal to 13 degrees.

A part of it, about 50 meters, is full of ground water, drinking water, which was used for the hospital and for the irrigation of gardens of the complex. 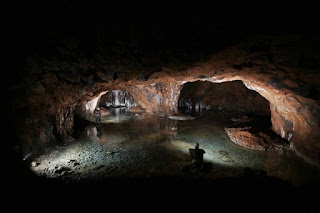 Posted by Penthouse Monteverde Rome at 13:04 No comments: